SNP MP Stewart McDonald has said the UK government cannot ignore Scotland on the issue of fair work and unpaid trial shifts following an answer he got from the Business - Energy and Industrial Strategy Department (BEIS).

Stewart McDonald asked the BEIS Minister what discussions he had with workers, trade unions and employers in advance of the Government's annual advertising campaign to encourage workers to take action if they are not receiving the national living wage or the national minimum wage.

The answer from the BEIS Department stated trade unions and business representative bodies were briefed on key elements of the National Living and Minimum Wage campaigns ahead of the launch. However, the Scottish Trade Union Congress’ Better Than Zero campaign - the largest Trade Union movement backing the fight against unpaid work trials – claim they’ve had no contact from the UK Government ahead of their advertising campaign on national minimum wage.

''This answer exposes once again that the Tory government is ignoring the views of Scotland.

“It is disgraceful that the largest Trade Union campaign, representing a large scale of opinion in Scotland, has been side-lined ahead of the Government’s national minimum wage campaign. Having already talked out my Bill aimed at banning unpaid work trials, it’s clear the UK Government cannot be trusted to get it right on fair work

“All people want is to be treated fairly - but all too often those who are desperate for a job are being asked to work for hours, days, or even weeks without any pay, or any guarantee of a job at the end of it.

“It is clear the current law is not working, and the UK government must now commit to changing the law - a fair day’s work deserves a fair day's pay.” 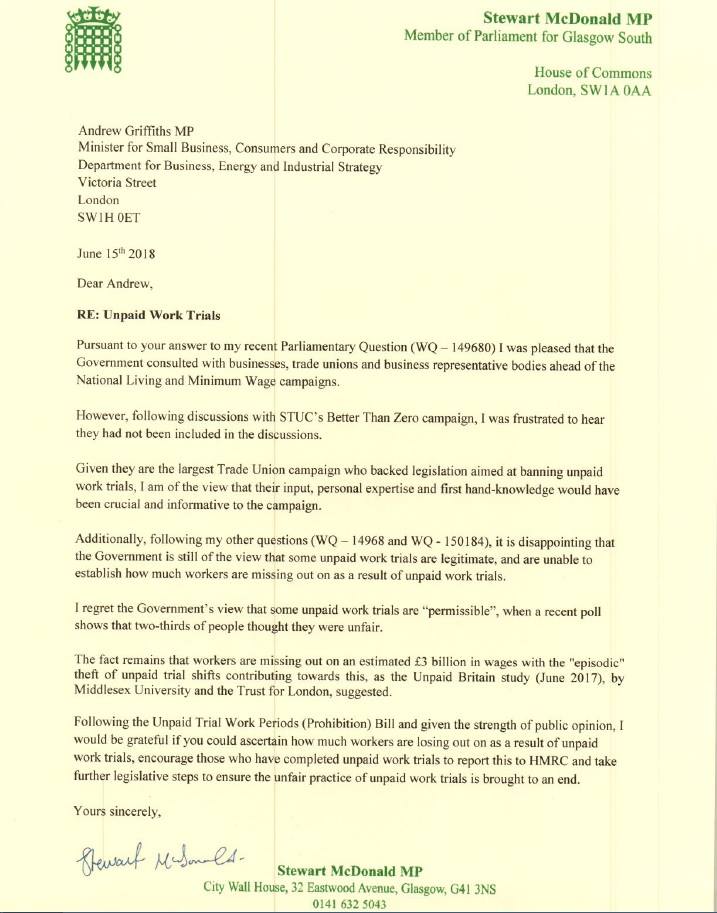