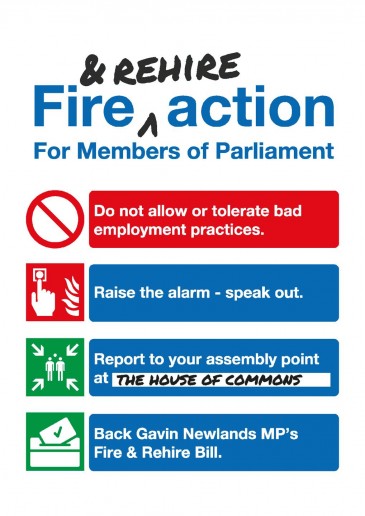 Fire and rehire is an appalling and abusive practice that must be outlawed - there are no circumstances where it could be considered appropriate.

The SNP have led the way when seeking to outlaw exploitative workplace practices, such as my previous Bill and ongoing attempts to ban on unpaid work trials - something I will continue to campaign against.

The charge against ban fire and rehire is another example of our efforts to ensure workers aren’t the victim of bosses looking to cut costs.

My SNP colleague Gavin Newlands MP has submitted two Bills to Parliament over recent months seeking to outlaw the practice, with the support of over 100 MPs, and with the backing of all major trade unions including Unite, BALPA and GMB Scotland.

The SNP have since challenged the UK government to publish the findings of a review completed by ACAS into the exploitative fire and rehire practice.

I, along with my colleagues, will continue to demand that the UK Government either get behind the SNP’s Employment (Dismissal and Re-employment) (No. 2) Bill or bring in its own legislation to give millions of workers – at Edinburgh Airport and British Gas, and elsewhere - the same protections enjoyed across Europe.

I am pleased the SNP 2021 manifesto commits to supporting a ban on fire and rehire tactics, but whilst employment law remains reserved to Westminster, we do not have the powers to enforce a ban ourselves.

The UK Government must act swiftly and decisively to ban fire and rehire practices or devolve the power to do so to the Scottish Parliament - until this happens, more employers will be encouraged to follow suit.