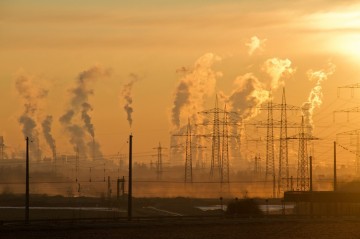 Climate Change is one of the greatest challenges of our generation - socially, economically and from a security perspective.

In Scotland, the First Minister used her Spring conference speech to declare a climate change emergency and to commit the Scottish Government to taking action to go further than it has already done in this area, if that is what scientific conclusions deem necessary.

There is a global climate emergency and people across Scotland have been calling, rightly, for more ambition to tackle it and safeguard our planet for future generations.

Amendments to the Climate Change Bill have been lodged to set a legally binding target of net-zero greenhouse gas emissions by 2045 at the latest with Scotland becoming carbon neutral by 2040.

The existing targets proposed in the Bill were already world-leading. In response to calls from young people, scientists and businesses across the country, Scottish Ministers have adopted the advice of independent experts, the UK Climate Change Committee.

This means that in addition to the net-zero target for 2045, Scotland will reduce emissions by 70% by 2030 and 90% by 2040 – the most ambitious statutory targets in the world for these years.

The Committee’s recommended targets for Scotland are contingent on the Tory UK Government adopting a net-zero greenhouse gas emission target for 2050.

The Scottish Government has accepted the independent, expert advice that even higher targets are now possible, and given the urgency required on this issue, has acted immediately to set a target for net-zero greenhouse gas emissions for 2045 which will see Scotland become carbon neutral by 2040.

The Scottish Government will continue to take an evidence-based approach and balance our climate, economic and social responsibilities. Scotland has already halved greenhouse gas emissions while growing the economy. The Scottish Government knows it can similarly deliver these new targets and is committed to meeting the most ambitious targets possible and doing so while continuing to build an inclusive and fair economy.

The Committee on Climate Change say that Scotland’s ability to meet these world-leading targets is contingent on the UK Government also accepting their advice and using the relevant policy levers that remain reserved.

In Westminster, MPs have followed the lead of the First Minister and declared a Climate Emergency. We must now ensure this is followed up with real action.

Last week’s BEIS committee report was clear that UK policy will prevent us achieving net zero. The UK Government must use its reserved powers act now to deliver for future generations

SNP MPs at Westminster will continue to raise these issues and push the UK to Government to match Scotland’s ambition in this crucial area and to ensure there is no backsliding on environmental protections as a result of the UK leaving the EU.