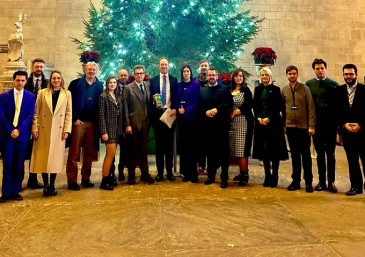 The SNP at Westminster today welcomed a Ukrainian delegation tasked with helping to create a special international tribunal to bring to justice those guilty of aggression against Ukraine.

The working group, which has been formed by Ukrainian President, Volodymyr Zelensky, has been tasked with developing and submitting proposals for the creation of a special international tribunal to investigate war crimes committed during Russia’s illegal invasion.

The group, headed by the head of the Office of the President, Andriy Yermak, consists of 16 members, including members of the President’s office, politicians, lawyers, and activists from across Ukraine, and was created to ensure a proper international investigation and bring perpetrators to justice for crimes of aggression across Ukraine.

The SNP's Stewart McDonald MP - who is hosting the event in Westminster – urged Parliamentarians ensure that our "warm words on Ukraine translate into action."

“The devastating war in Ukraine demands a united front from the international community to oppose, isolate and punish Putin’s regime for its abhorrent actions.

“I am delighted to welcome the delegation – which aims to gather political support for the creation of a special international tribunal and bring justice to those guilty of the crime of aggression against Ukraine.

"I welcome the unity in our solidarity and support for Ukraine in the UK, but it's clear that we must see a concerted effort on an international level to pressure Putin further and to ensure that our warm words on Ukraine translate into action.

“It is now absolutely vital that there is cross-party, cross-country support for a special tribunal. I look to engaging further with international friends and colleagues to see what steps we can take to support our allies in Ukraine and ensure military and political perpetrators of this illegal war are brought to justice."

“I express my immense gratitude to Hon. Stewart McDonald MP and to his office, Chatham House, for organising this presentation in Westminster

“The very fact of the countries' decision regarding the need to create the Tribunal as a response to the crime of aggression is a powerful signal for the leadership of the Russian Federation and may result in a complete change of the aggressor's plans for further continuation of the aggression against Ukraine."

The cross party motion on a Special Tribunal for Ukraine can be found here.