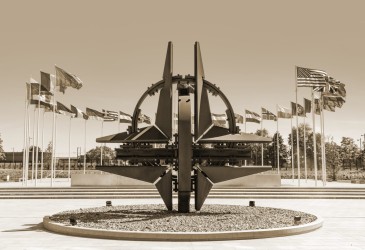 In advance of the Madrid Summit next week, where NATO Allies will meet to finalise the Alliance’s strategy for the next decade, the SNP have published a paper outlining what they would like to see in the strategy.

As liberal democracies enter a new age of global competition and new and emerging threats, the SNP make a series of recommendations for facing up to these challenges at three levels: that of the state, of society and of the international system.

The paper calls for NATO to pursue the closest possible relationship with the European Union, as two unique organisations with shared values and interests in the Euro-Atlantic area.

In the spirit of closer collaboration between NATO and the EU, the SNP argue that the United Kingdom should make signing a defence and security co-operation agreement with the European Union a key political priority.

The SNP also highlight the worrying trend of nuclear non-proliferation agreements and arms control treaties expiring without being renewed.

With all of the world’s nuclear states increasing or upgrading their arsenals, the SNP argue that NATO must be explicit in stating that nuclear proliferation is not in the long-term best interests of Allied states or the rules-based international order and should take the lead in strengthening international frameworks of nuclear non-proliferation.

Calling for a renewed focus on the Euro-Atlantic area, the paper highlights the 2021 storming of the US Capitol and arson attacks on 5G phone masts in the UK and argues that NATO must do more to build resilience to so-called “hybrid threats” such as cyber attacks and disinformation within societies.

"As NATO Allies meet in Madrid to agree their strategy for the next decade, the UK Government has an opportunity to turn the page on its troubled relationship with international law and our European neighbours. The moment demands no less.

“NATO and the EU are the twin guarantors of Euro-Atlantic security order. It is long past time the UK Government recognises this, brings an end to its petty avoidance of our European neighbours and signs a comprehensive defence and security agreement with the EU.

“As a party that wishes to see Scotland succeed as an independent member of the international community in NATO and the EU, it is vital that we are active participants in the ongoing debate about Euro-Atlantic security. These recommendations are made in a genuine spirit of wanting to see strengthened states, societies and systems to best protect all those living under the alliance, including those here in Scotland where support for NATO is in excess of 70 per cent.”

Read the SNP's recommendations for the NATO Strategic Concept here