"Nobody should die in poverty": MP pledges support for Marie Curie campaign 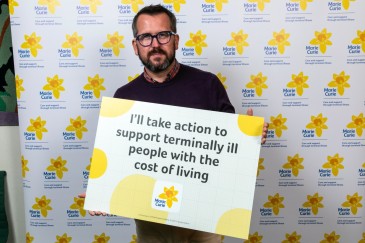 Stewart McDonald backed the end-of-life charity’s campaign against dying in poverty and is encouraging their constituents to do the same by signing a petition online.

The petition to extend financial support for people with a terminal illness and their families already has over 100,000 signatures.

The MP for Glasgow South said: “I was shocked to learn that ten people die in poverty every hour in the UK. As one of the wealthiest nations in the world this just should not be happening.

“It’s harrowing to hear about the plight of so many working people falling into poverty after a terminal diagnosis, and Marie Curie’s campaign is doing great work to highlight the areas in which financial safety nets are not suitable for the needs of dying people, especially working age people and working age parents.

“I’m proud to support this campaign and encourage everyone to sign the online petition to improve the lives of terminally ill people and their families.”