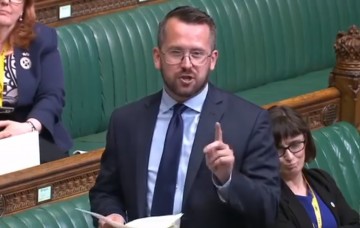 Stewart McDonald MP branded a Commons debate on the 50th anniversary of the continuous at sea deterrent a “back slapping love-in”.

The SNP Defence spokesperson highlighted the dangers of Trident renewal to domestic and international security, making the case for investment in conventional defence measures and urging the UK Government to bring forward a judge-led public inquiry into the scandal of nuclear submarine decommissioning that is costing the public dearly.

The motion to commemorate the 50th anniversary of the continuous at-sea deterrent was pushed to a vote by the SNP. Jeremy Corbyn failed to oppose the deterrent. The majority of Labour MPs voted with the Tories to back the weapons, while a majority of Scottish MPs voted against.

The SNP has consistently opposed the wasteful and dangerous renewal of Trident nuclear weapons, which could cost up to £200 billion over their lifetime as well as being afforded further funds on top of this at the last Budget. At Westminster, Labour and the Tories are officially in favour of the unjustifiable Trident plans.

“In the middle of such an enormous constitutional crisis it is obscure and somewhat perverse for Westminster to indulge itself in a self-congratulatory debate about being a nuclear power for fifty years.

“Quite simply, there is no military or economic case for the renewal of trident. The iron-clad consensus that exists between the Tory and Labour front benches on the issue of Trident remains one of the UK’s greatest weak spots and continues to endanger millions.

“The billions spent on Trident continues to suck up money from conventional defence and security – which has always been the priority of the Scottish National Party – and completely ignores the new and evolving threat picture the we in the UK face to which nuclear weapons cannot meet.

“Just a few days ago Parliament’s Public Accounts Committee admonished Tory and Labour Westminster Governments for their eye-wateringly expensive mishandling of nuclear submarine decommissioning, with an estimated £7.5billion bill. This ought to be the subject of a public inquiry, not a back slapping love-in dressed up as a debate.”