Posted on November 1 2016 at 15:37
SNP MP Stewart McDonald is calling for a ban on footballers wearing poppies for next week’s World Cup qualifier between Scotland and England on Armistice Day to be overturned.

FIFA does not allow players to wear religious, political or commercial messages on their shirts and has ruled that the poppies represent a political message.

The Scottish Football Association has allowed clubs to decide for themselves whether or not to wear the poppy with Rangers strips carrying the poppy in recent years and Celtic donating tens of thousands of pounds to Poppy Scotland but deciding that players would not wear poppies.

Stewart McDonald MP, whose Glasgow South constituency includes Hampden Park Stadium, has written to the SFA to urge the body to call on FIFA to overturn the ban and allow players to choose whether to wear the poppy, as is usually the case.

“Scottish football has a proud tradition of supporting the Poppy Appeal from players wearing poppies on their shirts previously to allowing charitable collections inside the gates on match days and it is important that clubs are allowed to show their respect and remember the great sacrifice that was made.

“Players should not be obliged to wear the poppy, but players should be able to wear it if they wish to do so - they must have the right to choose.

“The SFA allows Scottish clubs to make their own decision about wearing poppies during matches and it is this common sense approach that FIFA needs to adopt - next Friday’s match between Scotland and England will take place on an international stage and it is right to allow both teams the freedom of choice to recognise those who lost their lives during the World Wars.” 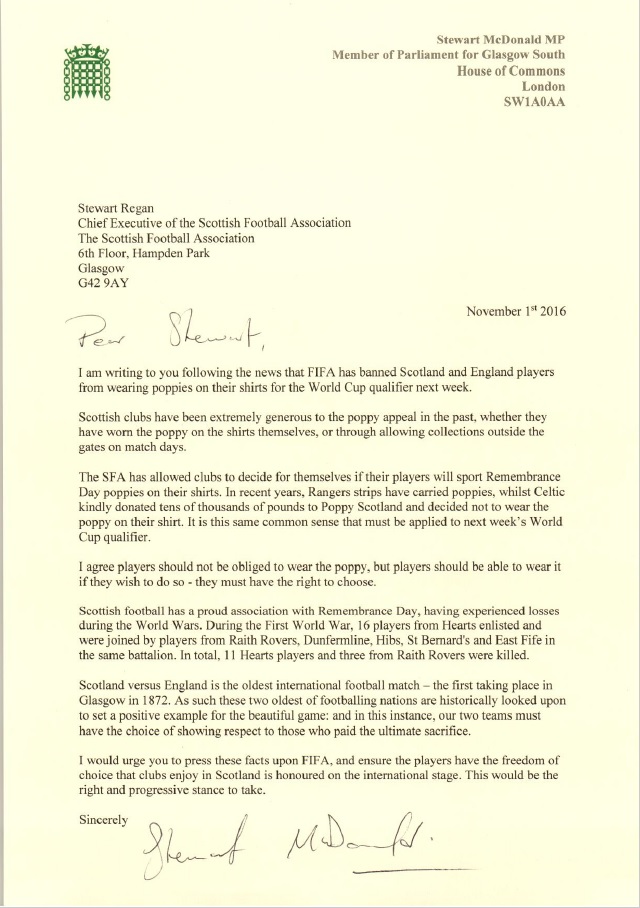