A tribute to Bill Carson 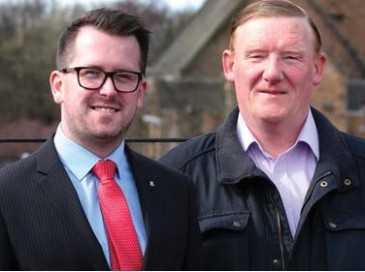 When I first stood for Parliament in 2015 there was a small number of community activists from across the constituency who I wanted to publicly endorse me: Bill Carson was one of them.

Bill was a big figure in every sense. He was physically towering, though never intimidating, and was the beating heart of his beloved Pollokshaws – a community that was to become a labour of love for him over many years. If a bin wasn’t emptied, a streetlight not working or a community group in need of funding, people went to Bill before they went to anybody else.

He loved the historic borough of Pollokshaws and devoted his life to it. A wander through the Shaws with Bill was never quick. Everybody knew him and he’d never miss a chance to introduce you to someone you’d never met – usually at the same time as demanding a new grit bin for Riverbank Street.

Bill was involved in everything, but it would be a mistake to think of him as just another busy body. He was only ever driven to get the very best for Pollokshaws and its residents – whether that was getting involved in the campaign to save the Sir John Maxwell School, taking the council to task over wrongly banded council tax or making sure the community had its annual firework display – he turned his hand to anything he could.

Bill knew every politician on first name terms and had laughed with us as many times as he was pulling us up over something. He would frequently perch himself in my constituency office or at a surgery, usually with a folder of documents and a cup of tea, wanting to go over various issues with me or my staff. He hated bureaucracy and had a nose for whenever he thought he was being fobbed off by a politician or council official. Bill could be a curmudgeon when he needed to be but never with a hint of malice – he’d jokingly sign off his emails ‘Mr A.N.Gray’ (Mr Angry), although my office later referred to him as ‘Lord Carson of The Shaws’ – he thought it suited him rather well.

He once joked with me that he worked harder than any politician in the area. It was probably true. Bill loved local politics but he never became a politician. It might be a cliché to say that he was the best councillor that Pollokshaws never had, but in his case it’s true.

Pollokshaws won’t be the same without Bill Carson, but he will certainly not be forgotten. He was a good man motivated by the best of intentions. I’ll always be grateful for Bill’s kindness, his generosity and his good humour, and along with many others, I’ll miss him.